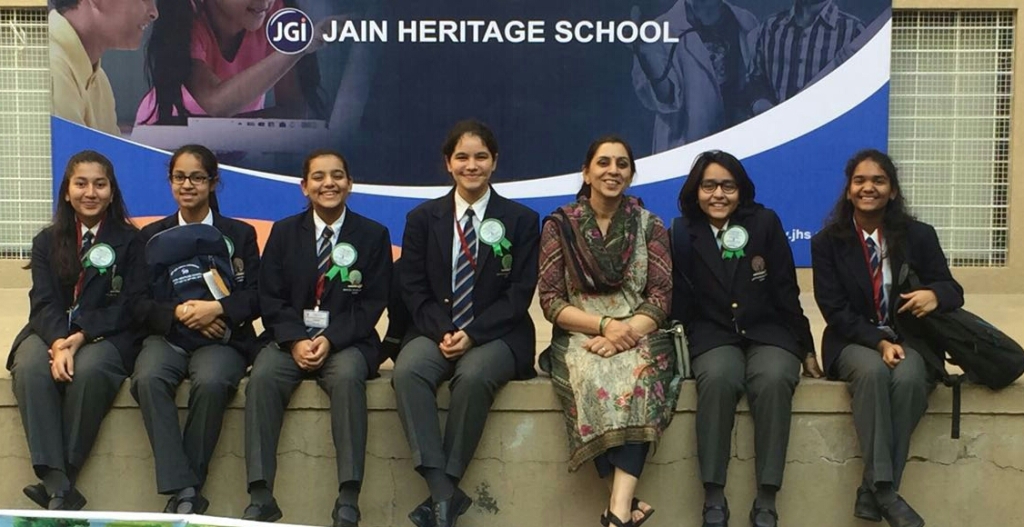 They were escorted for the conference by Mrs Rakhee Mishra who presented a paper on “Mathematical Instruments”
All the papers were well received and were much appreciated.

Over all the conference proved to be very fruitful as it opened our eyes to a completely new way of looking at Mathematics. The super charged atmosphere at the conference led to numerous agitated discussions relating to the many concepts and papers that were presented. One of the interesting discussions was on the change that is required in the Geometry box which has remained unchanged since it was first designed even though Mathematics has evolved by leaps and bounds.

Almost 25 students from various schools presented papers on diverse topics like Lilavati Bija Ganita, Sorting in computer science- Exploring merge sort as a sorting Algorithm, Ramsey numbers & the Party problem, Josephus’s problem and many more. Many interesting methods for faster mental calculations were demonstrated like with the Napier’s bones, Korean finger joining method, etc. Another paper dealt with Mathematics in various dance forms like Bharatnatyam, Odissi and many other folk dances.

Many interesting models were on display which dealt with topics like displaying Associative & Commutative properties with respect to operations of Rotation & Flipping in Triangles & Squares, Learning properties of Triangles, Parallel lines and Parallelogram by Triangle tessellations, Magic squares, working model to prove the Pythagoras theorem, model to show the 3-d space which provided interesting exercise to learn the co-ordinate system, model to create Ovals& Ellipses with just a pencil and string and also with the Trammel of Archimedes which was also constructed by the students.

Written round of the quiz was conducted on the 2nd day and the Final round was on the concluding day. The quiz was an eye opener and made us aware of the possibilities of using the same simple Math concepts in numerous ways. Written round had 126 participants and the Final round had 4 teams with four members in each.
On all three days, we witnessed lectures by several eminent Mathematicians of our country. Prof. Inder K. Rana gave a lecture on, “Teaching Math in the Google Age”; Dr. S. Murlidharan of TCS presented an interesting insight into the History of Mathematics through the ages.

Through the three days we gathered many other interesting nuggets of information and met many interesting people who made Math sound fun and easy.

Another interesting point that we would like to note was the extensive use of technology in Math and the use of softwares like Geogebra in Math learning and teaching. We hope that we would be able to incorporate more of these in our day to day learning as well.

There was little time to explore the city and the activities at the conference kept us completely engaged but we managed to spend an hour at the Bangalore Palace which was the residence of the ruler of erstwhile Mysore estate. The palace is an interesting blend of Gothic and Victorian architecture and amongst other things it boasts of an interesting collection of paintings. Some of these are copies of famous paintings but a large number of them are originals as well.