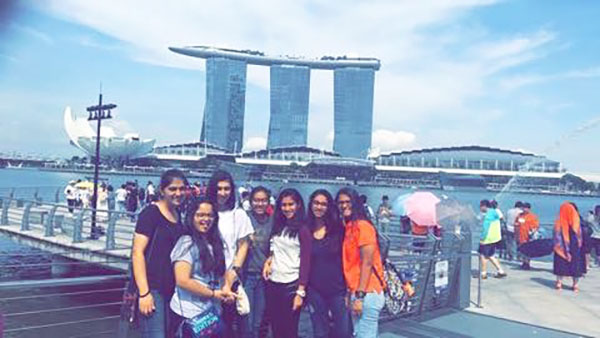 From the 9th to 16th May 2017,a group of  fourteen girls and five boys visited Singapore to be a part of  the Global Immersion program .The purpose of the trip was to give the children an idea about a Foreign university campus and learn about a student’s life in the university, experience the teaching learning process, visit the laboratory and library.

They visited two universities namely National University of Singapore (NUS) and Nanyang Technology University (NTU).The NTU University has been ranked No.1 in Asia and No.11 in the World.

The two day tour of the universities was an enriching experience. The students had a session with the Admission coordinator of the Nanyang Technological University (NTU) who told them about the various courses offered such as ​​​​​​​​​​Art,Design, Communication studies, Engineering, Humanities, Sports science and Medicine and Science. It also offers some Part time and Special programmes. They also got the information about the different scholarship schemes. Thereafter, they took a tour of the campus and saw the infrastructure.

The next day, students visited the National University of Singapore (NUS) which is a pure science university. They even got an opportunity to attend the various master classes like physics, chemistry, forensic sciences, mathematics, biomedical and many more. Thereafter, they took a tour of the campus and saw the laboratories. Both the universities had well maintained libraries that contained all the information pertaining to the subjects they had to offer and also provided the students with a recreation area to come to when they needed a break.

Other than visiting the universities we had various interactive sessions with people of different fields like a talk was given by Mr. Ramakrishnan who is a part of Facebook. The session with him was quite interesting where he discussed the advantages and the disadvantages of social media. He also enlightened the students with the upcoming plans of Facebook and the motives of the founder, Mark Zuckerberg.

On our last day, a tour of the New Water plant was organized to give the students an idea about the water conservation of Singapore. They saw a presentation on the necessity of water conservation and the different stages of water purification. The water purification in the city is done in four stages which ensure that everyone gets absolutely pure and clean drinking water everywhere in Singapore. The New water plant also claims their technology to be one of the best in the world.

The trip also was a rejuvenating one, as the students visited some famous tourist attractions and museums. One of the museums displayed how the planning of the city was done and what are the future plans of the country, using a miniature model. such as the  ‘Marina Bay Sands’ which is the famous hotel.The well known Chinatown ,Bugis street,the statue of Merlion.They took a tour of Sentosa Island where they witnessed the famous light and sound show. The last day was spent at the famous amusement park, Universal Studios which was a great experience.

Overall all the students got to know Singapore as a smart city and had an amazing experience.It was an enriching experience and they learned a lot from it.