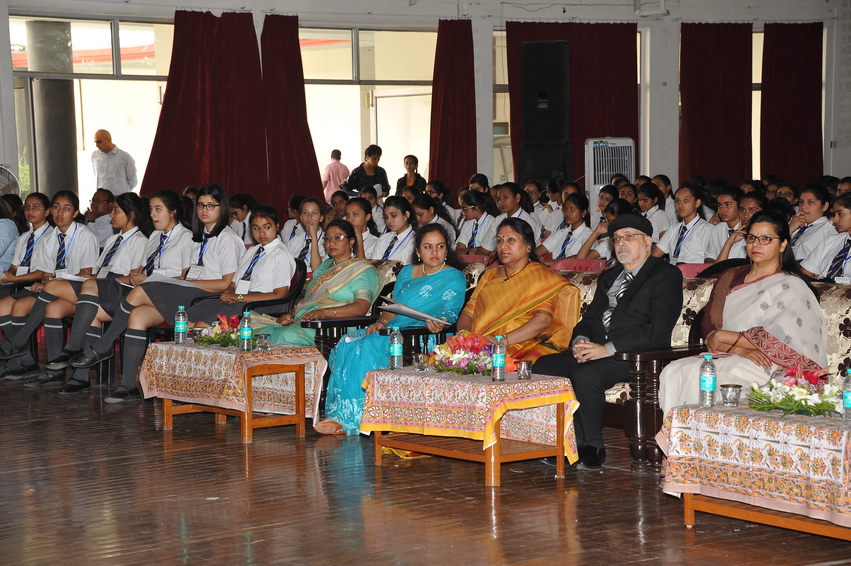 Preconceived perceptions of the ways of the world have always been questioned, prodded and critically analysed by the inquisitive generation. An excellent outlet to these numerous yet untapped opinions has been given to us, the youth, in the form of Model United Nations Conference since many years. An authentic simulation of the United Nations, Model United Nations Conference aims at promoting discussions on world affairs encompassing issues as diverse as international peace and security, economic cooperation and development, human rights or the protection of the environment. Students engage in fruitful deliberations over pressing global issues as diplomats of different countries, in a bid to preserve the ever so violated peace.

This year, we hosted the seventh session of the Mayo College Girls’ School Model United Nations Conference from the 20th of April to the 23rd of April. With the school orchestra performing songs of peace and co-existence, a wonderful bharatnatyam recital followed by powerful slam poetry, the Conference commenced with a grand Opening Ceremony, where Mr Utpal Chatterjee- an acclaimed journalist was the Chief Guest.

With over 250 delegates attending the conference from all corners of the Indian subcontinent, MCGSMUN’18 convened eight different committees in a bid to INITIATE, NEGOTIATE AND LIBERATE: The United Nations Security Council which had an emergency meeting on the Israel-Palestine Conflict and reassessed the need of peacekeeping forces in Cyprus, The UN Human Rights Council discussed the right to privacy in the digital age, the UN High Commissioner for Refugees discussed the protection of populations displaced by climatic changes and disasters, The Commission on the Status of Women  deliberated on the issue of Women Economic Empowerment, the  International Olympics Committee reviewed the Olympic Bid for the Summer Olympics, 2032 and also the selection of developing countries as Olympic host nations, the Paris Peace Conference established the terms of treaty after World War 1, the Stakeholders’ Meet for the Ministry of Health and Family Welfare addressed the challenges of the National Programme for Health Care of the Elderly and the International Press Corps where delegates explored the realm of journalism by representing news agencies such as Reuters, Al- Jazeera etc. The committees had two days of rigorous debate where some committees did pass resolutions while some failed to reach a consensus despite having extensive debates.

This year, we at MCGSMUN initiated a campaign in an effort to instil a sense of empathy in each delegate and remind everyone that to discuss agendas which affect us so adversely, we need to possess this quality- empathy. Through this campaign, which was a great success, we envisioned to explore the harsh realities of the communities of rural India to give a first-hand experience to the delegates so as to enhance their level of sensitivity. This was an attempt at making the delegates understand the policies they defend in committee sessions at a grass root level.  The third day of the conference also had the Crisis Session simulating an emergency General Assembly session where delegates discussed real time crisis for four hours and deliberated over possible solutions. The crisis session successfully tested the ability of delegates to solve a crisis with spontaneity, critical thinking and diplomacy.

The closing ceremony took place on the 23rd of April 2018 where Mr. Jitendra Nath Mishra, a Grade 1 IFS officer was the chief guest and he inspired all of us with his speech. The delegation from The Doon School, Dehradun took home the Best Delegation Trophy and The Mayo College delegation bagged the first runner-up trophy. Following the nerve wrecking prize distribution ceremony, the Secretary General closed yet another successful conference.