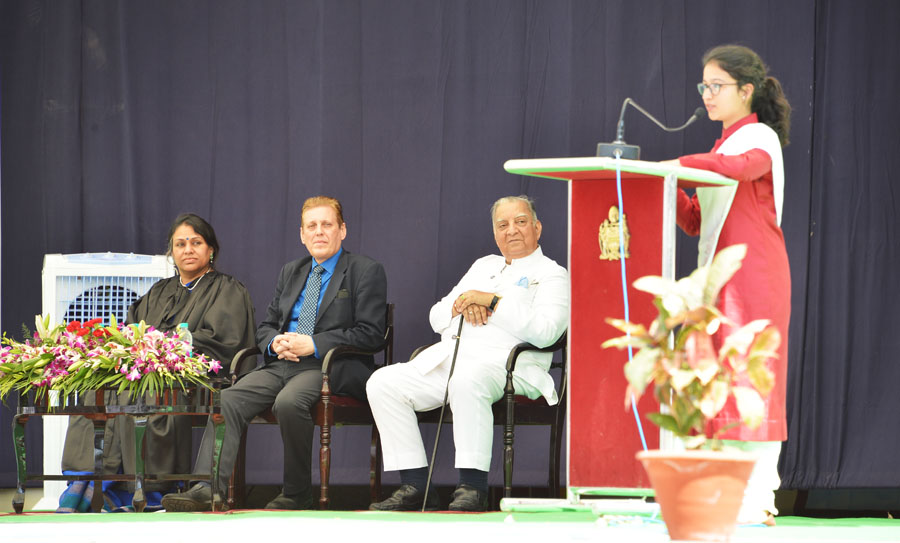 From the 13th of October, our 30th Annual Prize Giving began. The day started with the inauguration of the Exhibitions by the parents of the school captain, Navya Mehta. Students under the guidance of their subject teachers put up enthralling exhibitions on topics like juvenile delinquency, triple talaq, and tourism in India to name a few. Alongside the exhibition, the library had organized for a book fair which took place in the gymnasium. On the same day in the evening, the junior school put up a mesmerizing variety entertainment show. The students from various classes took part in the performances which included drama, dance, and poem recital. Later in the evening, the sports day was held with Deepa Malik as the chief guest. The students of Jamila Singh House and the students of 7th, 8th, 9th, and 11th grade put up a jaw-dropping drill preparation. The sports commenced with the houses showing their house spirit as the proudly marched house wise. It was followed by the torch bearing, which was to encourage the sportsmanship in the students. The guests also witnessed a few athletic events. The prize distribution at the end and a very inspiring speech by the chief guest Deepa Malik marked the end of the events of the day.

On the second day of the Prize Giving, the exhibitions continued followed by the Parents’ Teacher Meeting. Later in the evening, the students of the school put an enriching play, “Looking for Matilda”. The play was written by the students of class 12th and mentored by Sir Pranab Mukharjee. The play had a huge participation which involved more than 350 students overall. The play was followed by a lavish dinner.

The last day that is the main Prize Giving Ceremony started with a bharatnatyam performance by the students which was followed by the Prize distribution by  the chief guest Dr. Pascal Chazot to all the students who had done exceedingly well in studies.