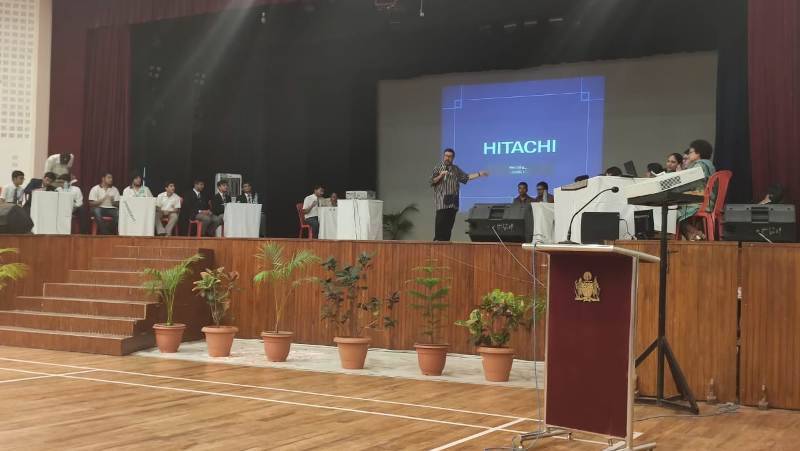 The IT event for Website Designing was held in the Computer Science Laboratory on the 27th August, 2019. A total of 17 schools participated in this event. The theme on which they had to design a website was IoT (Internet of things) in the Health Care Sector. IoT in healthcare facilitates simple yet important tasks like improving patient outcomes and taking some burden off the health practitioners. IoT has applications in health care that benefits patients, families, physicians, hospitals and insurance companies together along with saving time and costs.

All participating teams came up with unique and attractive websites within the stipulated time of four hours. The judgements were made later in the evening. The experience was aesthetically satisfying for all the participants. They tried to capture all aspects of a functional website by highlighting  usability, quick and easy navigation, precise information and welcoming imagery on every page. The teams await the announcement of results with bated breath.

‘What is drama but life without the dull bits cut out.’ -Alfred Hitchcock

Drama is a strong medium of communication and is an important tool in preparing students to work in a world that is team- oriented.

The event of the English Script Enactment took place in the School Auditorium, from 3:30 to 7:00pm. Nineteen schools participated in the event and each school was given a duration of 7 minutes to perform. The theme- ‘Understanding the Cycle of Power, Ambition, Nothingness, Loneliness and Memory’ was shared with the students a day prior to the competition. The participants were shown three placards with different words written on them during the performance. They were expected to change the emotional tenor of their act spontaneously according to those words.

The participants were confident and emotive. Each team had interpreted the theme in a different way and presented their perceptions of the world in new ways, explored hidden patterns, made connections between seemingly unrelated phenomena, and roused the consciousness of the audience to issues like abuse, discrimination, violence and marginalisation. All the performances were highly appreciated and left the audience spellbound.

The Semi-Final round of the English Debate took place on 28th August, 2019.  Six teams out of the participating twenty-four schools qualified for the Semi-Final round. The teams were divided into two pools. Pool ‘A’ comprised Sunbeam School, Lehartara, The Indian School, New Delhi and Mayo College Girls’ School, Ajmer, while Pool ‘B’ comprised Mayo College, Ajmer, Springdale School, New Delhi and Singapore International School, Mumbai. The topics given to the teams were in relation to the political scenario of the world. Pool ‘A’ discussed the dominance of China, India and Russia in the International community. The members of Pool ‘B’ deliberated upon Nations and their duties towards refugees. We witnessed an engrossing debate and the speakers captivated the audience by bringing out a variety of points to support their argument.

The Preliminary Round of the quiz took place in the Lecture Theatre and the Environmental Science Laboratory simultaneously from 12 noon to 1 pm. Twenty-four teams, each comprising three members participated in the competition.

The participants tackled a set of 37 questions structured by Mr. Parnab Mukherjee.

The final round will take place in the Auditorium at 6 pm today. We wish all the very best to all the qualifying teams. May the best team win!