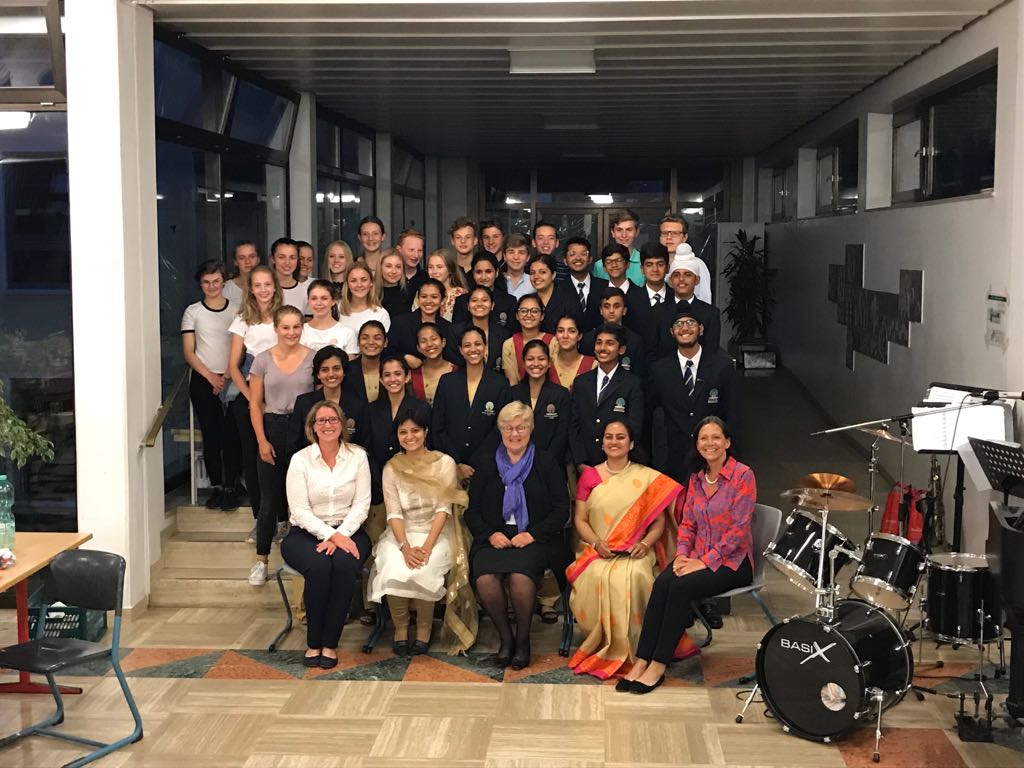 Twelve girls of class X with their escort teacher Mrs Dwivedi, went for an exchange with the students of Ludwig Thoma Gymnasium at Prien am Chiemsee. Prien is a small town of the Southern province of Germany- Bavaria. It has a population of about 10,000 , the biggest in the area, therefore has 2 higher secondary schools.
Families from all villages and small towns around Prien send their children here.
The school has somewhere around 1000 children.
The sunrise here is early around 4:30 am and the sunset as late as 10:30 pm.
All our children stayed happily and comfortably with their hosts, making a wonderful rapport with the new foster family.
We visited the Mayor of Prien on the morning of 19th June and later visited a sewage water treatment plant and solids waste segregation area. Germany has attained its economic growth with a hundred percent public participation.
On the 20th we visited the most automated BMW factory where there are robots working, the factory makes a daily average of 1400 vehicles in different models.
For the post lunch session we visited the medieval town of Regensburg, it is a Unesco heritage site town as though it was kept in a time warp.
On the 21st after classes we were taken to the Herrenchiemsee and Frauenchiemsee islands on the lake Chiemsee a lovely experience again..

We went to Munich on the 22nd Friday,
We saw several monuments and the tour was guided by their students which was a brilliant idea.
Children enjoyed with their individual host families over the weekend.

On Monday, we visited the salt mine at Salzburg, it was a marvellous experience.
We even trekked up to a gorge and back on the way to the salt mine.
The city of Salzburg in Austria is a tourist destination and we could spot several Indian tourists there. We saw the birth house of Mozart besides many other monuments.
Next day after classes we visited a dairy farm where we learnt about the dairy system of Germany.
Later on the same day we had the cultural evening and pooled dinner, we planted a sapling to commemorate this exchange. During the cultural programme our children were brilliant as usual.
On the 27th we went on a trek to Kampenwand the Alps 1600 m above sea level and it was a breath taking experience. Our children were very sporting and disciplined throughout.
The next day was dedicated to the passing out batch of LTG.
Not wanting to bid adieu to the awe inspiring experience at Ludwig Thoma Gymnasium, with heavy hearts we left for Berlin on the 30th.
After a hectic sight seeing of the historical capital city of Germany, we headed back home on the 2 Nd of July.
Our children are already looking forward to hosting their German partners in the month of October this year.

NIIT Workshop on Project based Learning